NXT at the moment.

Okay, I've managed to catch up with WWE's NXT as far as last week's show (this week's doesn't air here until tonight) and I'd like to know why they seem to have broken up the tag team of Leo Kruger and Kassius Ohno ?  This could have been such a dominant tag team.
I understand that both wrestlers are beyond fabulous singles wrestlers, but I really thought that there was going to be a big push for them as a team.
Bit disappointed that they got jammed out of the tag tournament.

The feud between Bo Dallas and the Wyatt Family, is one of the few that makes sense.  Well, as much as they are letting the Wyatt Family make sense. Are they going to reveal that Bo Dallas and Wyatt are brothers in real life, or not?  I would.  It would add just an extra bit of spice to the mix.

Corey Graves. I'd like to see what he could do on announce for a few matches.  We're not getting a whole lot of his personality with the little mic time they have given him recently.  Yes, I know he's a Heel, he's this bad ass who can turn anyone into a human pretzel, but can we hear him ... now?

More Shield. Please. I think I've become addicted to them.  Dean Ambrose has totally won me over.  I know few months back, I was cheering just Seth Rollins and Roman Reigns, but Dean Ambrose has gotten under my skin. In a good way.
He's someone else I'd like to have take over the announce booth for a few episodes. Maybe that's it, maybe he's hypnotized me with that vampiric voice of his?

Love Ardeth Blood
Posted by Domestic and Damned at 12:57 PM No comments: Links to this post

Can we make this happen?

So, I was hanging around GetGlue tonight, talking with some folks about movies. And we were saying wouldn't it be cool if blah-blah-blah-blah-blah were cast in this film?
And it got me thinking.  The 2004 Universal monster film, Van Helsing is getting a franchise reboot. Starring, wait for it... Tom Cruise.  We already know the dude can play a vampire. He played Lestat in the 1994 Interview with the Vampire, and we know he can handle action/thriller movies. (That's the only movie of his I've cared for)

But if I were casting a vampire movie of this caliber, I would want guys in it that have some real bite to them.  And what the hell, Triple H has already sunk his teeth into the role of  vampire Jarko in the 2004 movie Blade 3: Trinity.
And if you've been reading this blog over the last while, you know I totally see members of the Shield in a werewolf-ish light.  (Chris Sabin is totally on my werewolf wish list. Someone needs to build an entire trilogy just for him.  I think I would have to add Zema Ion to the werewolf list too)

So, if I was going to cast a big vampire movie, who in the wrestling industry would I cast?

Okay, you have to put Sheamus on this list. He already looks like a vampire. And going by some old folklores and myths that say if you were a redhead you are... there is no doubt about it.

Austin Aries (I'm just going to jump from company to company here as I think of them) I think would make a perfect vampire god. There is just something about how he can deliver a line that, with that smirk of his, totally screams vampire to me.

Dean Ambrose. I think he'd make a great Dracula. Or even a really good Lestat. He's got that undertone of cocky sarcasm. It would have to be the early versions of Lestat, before Tale of a Body Thief, cause I don't know how well he could pull off the self loathing depressed parts of the character?  Or you know, Santiago, maybe Armand.... okay I really want to see him as a vampire.

Leo Kruger, would make a picture perfect Vlad the Impaler, in a bio-pic. Just toss a sword and hat on him. (the only actor to ever pull off a decent version was Rudolf Martin  in the 2000 made for tv movie Dracula the Dark Prince aka Dark Prince the True Story of Dracula)

Seth Rollins, is on this list. Some of the things I've seen this dude pull off, I have to wonder if there is some bat in him?

Alex Shelley... come on, haven't talked about him in ages, but I think he'd make a decent vampire. Could totally see him as Nick Knight if they ever reboot that series. Actually, I could see him as one of the other roles in Dracula, like Johnathan Harker, or Arthur Holmwood.

Wade Barrett would make a really good modern version of Van Helsing.   Huh, I sort of forgot about the vampire hunters.  The Miz or Kassius Ohno, or Corey Graves all come to mind as a vampire hunter.

Well, you see where my brain takes me when I'm left alone too long, into the shadows and under the graveyard.

love Ardeth Blood
Posted by Domestic and Damned at 10:41 PM No comments: Links to this post

Yeah, that's yet another quote from yet another vampire movie.  I'm just chalk full of vampiric goodness. And it seems, now I have to get wrestlemaina next month. I was just going to not and catch the results on the website, but since I found out the Shield have a match... well I can't miss my favourite vengeance demons. (if you're a Buffy the Vampire Slayer fan you'll get that one)

So of what we know about the schedule for wrestlemaina at this point, here's the short list of what I want to see happen.

- The Shield win their match. No, I don't think I'm asking too much here. I get that it's Wrestlemaina, the payperview that started it all, and that it will mark the change in storylines for the coming year, but that doesn't mean that we have to follow the same old same old.  I know this point would be where normally, the faces win, after months of being repressed, but damn it! I think having the Shield come out on top will show something many fans already know. You don't have to be the face to be good.

-CM Punk, winning over the Undertaker. Yeah, I said it. I want the streak to end and I think that Punk is the one to do it.  Why?  Because he's got the skill to back up the talk.  I think it would be a brilliant move on the part of WWE to have CM Punk overturn the Undertaker, then get the belt back the following night.  I want to see CM Punk beat his own record for longest title reign, at lest have him reach six hundred and sixty-six days this time. (if you followed my last post that will sink in, in a minute)

-more NXT guys on a ppv.  I'm a few weeks behind again on episodes of NXT, so right now I can't comment on much, other then let's bring them into the spotlight more.  Even something like a tournament or four way for NXT number one contender during the ppv.  Which could you know, springboard one month in the coming year an NXT ppv... that would be cool

-Speaking of the Shield, I would love to see them get involved in the Rock/Cena match.  Cause I neither like Rock nor Cena (pictures Seth Rollins with the belt held high)

- Alberto Del Rio vs Jack Swagger... I'm tired already of this story.  Obviously thou, I want Del Rio to win this.  I want him to keep his title, and defend it against Wade Barrett soon.  I want to see that particular belt on the waist of Barrett. 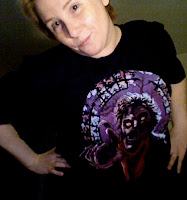 Well, we're still a few weeks away from the year's ppv, but that's what's coagulating in my vampire movie soaked brain right now.

Posted by Domestic and Damned at 3:37 PM 2 comments: Links to this post