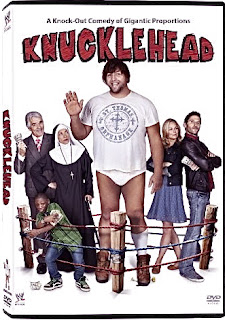 Plot: A kitchen fire burns down the orphanage where Walter lives. They have been given one week by the health inspector to rebuild the kitchen or else everyone will be turned out.  Walter is then spotted by a fight agent who sees only one thing, someone big enough to destroy the other fighters. Walter agrees to go on a short tour, the whole time being taped and becoming the biggest thing on youtube.  Not only do they have to survive the week, they soon learn that a loan shark has kidnapped one of the other orphans and in order to get him back, Walter needs to loose the biggest tournament. Will they fall under the pressure or battle their way out?


The plot is thin but it's very workable as it's a buddy movie. In one scene, you see actress Wendie Malick (who on IMDb is not credited in this film) drag Big Show around by the ear, giving her character more laughs then the rest of the cast.  Mark Feuerstein (Sex and the City, In Her Shoes, Practical Magic) , picks up the other half of the buddy end of this buddy film, carrying all the heavier dialogue. The combination is seamless as we see Big Show earn his weight in gold as a innocent pawn who proves he's more then just the big guy.
Two unlikely love stories unfold through this, one between Feuerstein's character and Mary (Melora Hardin) a former party girl turned orphanage-landlord,  and between Walter (Big Show) and a trailer park resident (Rebecca Creskoff). Which I must admit, threw me for a loop as the first few scenes make you think Walter and Mary are an item.

This did at times remind me of the Jack Black movie from few years ago, Nacho-Libra but thankfully was more thought out and a hell of alot funnier.

I really liked this film.  I have never been much of a fan of the Big Show, until he started to do comedy on Smackdown the last few months, in promotion of this film.
He's the star that WWE has been needing with their movie base. Hope there is a sequel in the works.
Posted by Domestic and Damned at 1:09 AM